When it comes to the choice of gaming mouse or keyboard, options are limitless – but that doesn’t mean every product is actually worth the price.
In 2015, I had the $3 mouse and $5 keyboard, both of which almost fell apart – that’s an experience not worth of the extra lines. Yet, it’s needed to see why my choice of new mouse and keyboard back then wasn’t too demanding. I just wanted something new which would work well, be a bit more comfortable and probably a bit fancy.
I came across the Bloody products absolutely accidentally. Back then it was under A4Tech brand – Bloody was just a small product line. Now it’s a standalone gaming accessories brand but still a subsidiary of them. The company itself is from Taiwan (just in case you’re not quite sure – it’s an island country here).
Mouse looked fancy, sturdy and had LED lights on it which was a pure rocket science for me back then. But most eyecatching was a logo which was absurdly similar to the Dark Brotherhood emblem in The Elder Scrolls series. Thus, while to spend $30 on a mouse was a serious sum to me, after I saw it, second thoughts were thrown out the window.

Modern gaming mouse can spike up to 16-20k DPI nowadays - but note it was 2015. DPI is also a personal thing to begin with - it just shouldn't be lower than your monitor horizontal resolution. For instance, if you have a 1920x1080 monitor - not less than 2k DPI.
Modern Bloody mouse models have up to 16k DPI, so if you're a higher sensitivity fan, you can get this easily.

This feature is made purely for shooter games in mind - I never used it asides from just a basic tests. It allows you to perform different kind of shots with a single keystroke - single shots, bursts etc.
At the same time, the buttons don't disturb you if you don't use them. From a report of a friend of mine who used the same mouse for shooters, they work exactly as described in a long-therm usage.

Is not something you usually get from a $30 mouse - they look good and make mouse to grip the mousepad more confidently. Only thing that happened to them - red paint has somewhat worn off. Yet, it's not like you gotta ever see that until you turn the mouse upside down. A solid plus.

Software is nice and simple for basic usage - for the macros setup, it may take some time though due to lack of manufacturer instructions. Software downloads from the official website can hiccup sometimes, probably due to the island location of Taiwan.
Asides from that, software works as intended and extra buttons are enough for most of videogames tasks. Maybe just the most demanding MMO players will find that not enough.
The best thing here is you don't need to always run the software. Once done, settings are stored in your mouse hardware (inbuilt) memory.

Mouse work over the time:

After 6 years of active usage for both games and work (7-10 hours average), my Bloody V7 gaming mouse is still in great condition. It doesn’t slip, there are no double clicks or sticky buttons, the shape is whole and nothing broke in general. The cable fabric has worn off in the place where it rubbed the desk edge the most – but cable itself has no damage. There are no signs of fail in any aspect at all. Same can be told by a friend of mine who has the same mouse for slightly over a 5 years. I also love the restpad for the thumb, but that’s a personal preference. 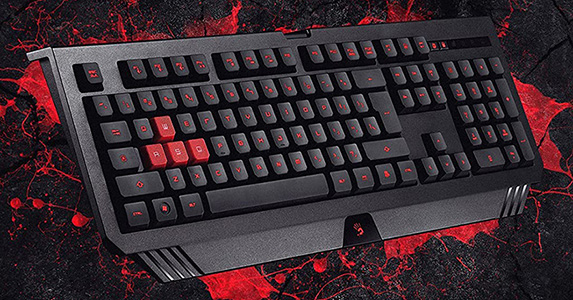 It’s a wired membrane keyboard, so – it’s all simple here. For it’s $34 price, it has everything it can – and even a bit more. It looks good, has LED lighting (with 5 levels of brightness you can switch between using a dedicated button) and silicon material for WASD. Keystroke sound is moderate.
It’s also compatible with the official Bloody software for some extra macros setup – but I haven’t tested that much either. The plastic is of an actually good quality. The “water resistant” checkmark is not a bait either. I never tried to take a bath using it instead of a washcloth, but in 6 years of usage, only 1 key started to fail. This is after I spilled various liquids on it at least 5-6 times – from water to soup and soda. A really solid result for a membrane keyboard of this price if you ask me.
The lighting has only one color – red, and it’s less bright even on maximum brightness level, compared to many other keyboards. Brightness was ideal for me personally, but this can be a downside for other people.
Couple of keys also have their painting worn off almost completely, which is quite expectable with the keyboard price range and time passed. Here’s how they both look today (photo also shows the mentioned keys with worn off paint as Jotaro-san watches over my desk closely).

I didn’t try the high-end segment of the Bloody accessories yet (though plan to get a current gen gaming mouse in near future). Yet, as for the budget gaming keyboards and mice, A4Tech/Bloody offers a great combination of looks, features, quality and price. This is not every mainstream brand can offer in the same price range. For the mechanical keyboards, Bloody manufactures own key switches, which can be hit or miss as they don’t have enough reviews yet.
The brand itself looks pretty underestimated/recognized in the EU/US (just see the amount of Amazon reviews compared to popular trademarks). While its more expensive products should be looked at with caution, the budget ones are surely an option to consider. You can look for the reviews yourself here, and take a look on the Bloody official website as well. As for the gaming mouse and keyboard reviewed, you can find them here and here respectively, and other tech reviews here.
Happy gaming!